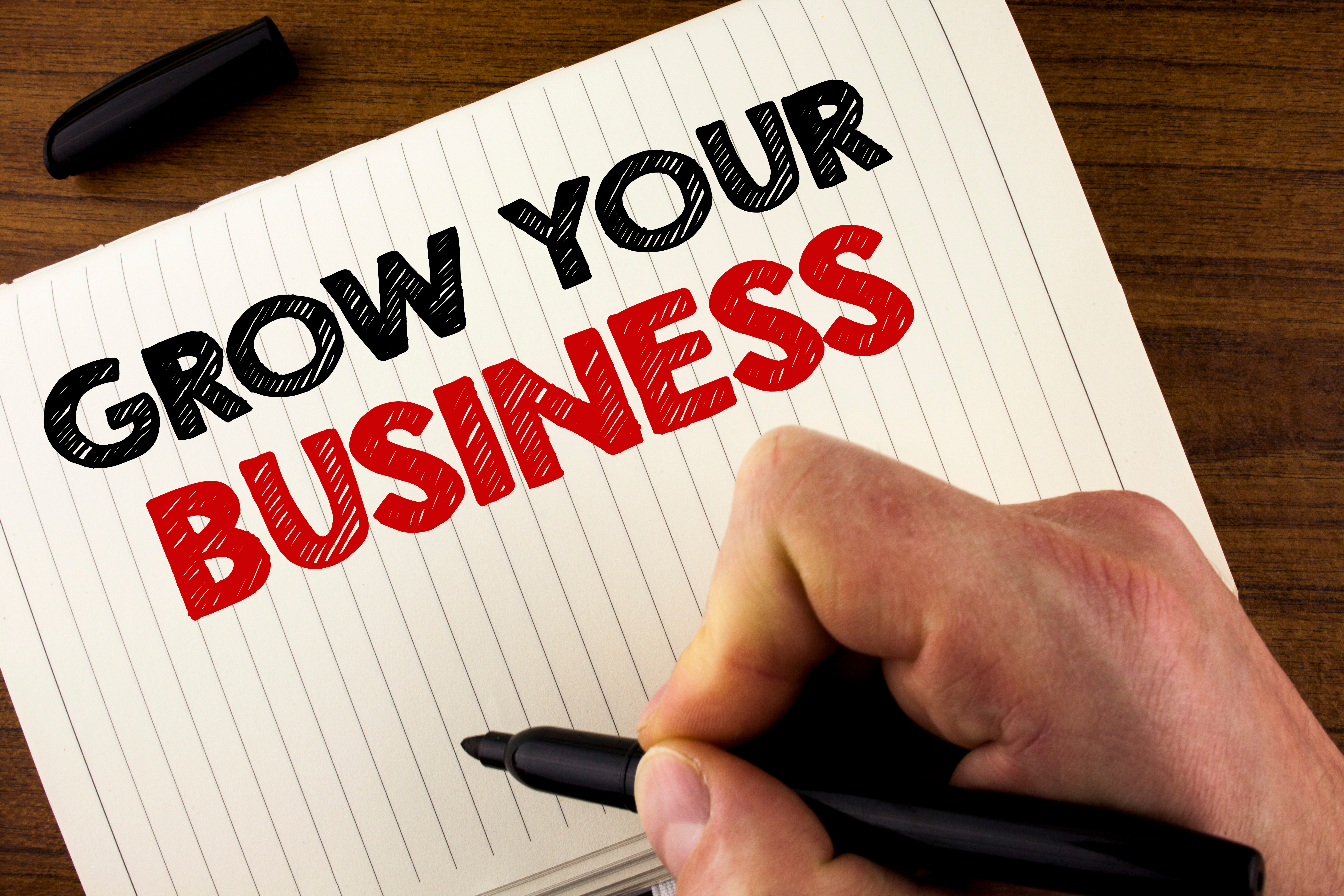 Nobody likes leaving money on the table – especially when it’s right within reach. Unfortunately, professional cable installers are doing just that. For new projects that require cable certification, installers are well versed in churning out certification tests and handing the client a detailed report of the results. What many aren’t aware of, however, is the fact that businesses are willing to spend a bit extra for Pre-commissioning cable tests that help to ensure their endpoints and IoT devices can operate at optimal levels once the network and/or Power over Ethernet (PoE) equipment is installed. Let’s learn more about what these tests are and why customers are willing to pay for them.

What is a Pre-commissioning cable test?

Cable certification tests that professional installers are accustomed to conducting are often performed immediately after copper and fiber is pulled – but before any network equipment is installed. While certification test is valuable in the sense that it confirms meeting manufacturer standards for warranty purposes, it does not provide guarantees of real-world link speed and PoE load capability under load. Thus, once network and power delivery equipment is installed, a Pre-commissioning cable test should be run to verify that cabling, connectors and power delivery hardware meet the required power and network performance for any given use-case.

What is driving the need for Pre-commissioning cable tests?

Increased use of technology via automation, machine learning and IoT is putting pressure on IT staff to deliver network connectivity that’s both ubiquitous and reliable. As such, IT leaders have grown more cognizant of network infrastructure problems at the physical layer that potentially hinder these types of digital transformation projects.

Network access devices and sensors connected via copper or fiber cabling are calling for increased throughput to account for the uptick in data that is transmitted between endpoints and application servers these days. Additionally, real-time streaming services require increased performance from a network latency, jitter, and packet loss viewpoint. What many IT shops are discovering is that even with new and fully certified cabling, there’s no telling as to how the cabling will actually perform under load at multi-gigabit speeds.

Further compounding the physical layer performance issue is an escalation in the number of PoE devices – many of which require higher levels of power delivery than ever before. The increased numbers of devices combined with higher levels of power output running across each cable can cause electromagnetic interference within and between cables. This interference can significantly impact data transport from a performance and reliability perspective.

What types of Pre-commissioning tests should be run?

To ease concerns of physical layer performance problems in production environments, it is now recommended that Pre-commissioning cable tests be run to simulate how cabling will perform in real-world situations. Both the AEM TestPro CV100 and the Network Service Assistant (NSA) can run these types of tests when connecting to production twisted-pair copper and fiber optic switches – including those that use built-in PoE or midspan power delivery components.

One critical test that must be performed is a Multi-Gigabit Autotest, which puts both traffic and PoE load on the wire simultaneously to create as much of a real-world scenario as possible. A per-pair Signal-to-Noise Ratio (SNR) measurement is then made at 2.5, 5, 10GigE connection speeds, giving you a verification that the signal is strong enough to get through the noise on the wire. Having a per-pair breakdown also provides an indication of headroom. This is a quick test that can be performed with a printed report as a customer deliverable. While Bit Error Rate Testing (BERT) is also sometimes used for this purpose, these types of tests must be left to run over a period of time in order to obtain meaningful results. The ability to run a rapid Autotest under both traffic and PoE load with a printed report output gives contractors a quick and easy path to this new service offering, with the same tester used for certification or qualification+, and no need to purchase additional test gear. Multifunction testing capability also means faster ROI.

As you can see from the example test result below, the Multi-Gigabit Autotest report shows simple pass/fail results at various multi-gigabit link speeds. Additionally, SNR readings are shown on a per-pair basis and PoE load test results indicate the detected PSE Type, allocated power coming from the PSE and actual Wattage (Real Power) delivered to the remote end of the cable:

A second recommended Pre-commissioning test for existing or newly-installed Cat6A twisted-pair cabling is bi-directional 6-second Cat6A Channel test performed with the TestPro CV100. This test (example below) largely focuses on cabling performance from an RF perspective. This test can point to problems with data transmission interference due to increasingly higher rates of data throughput speeds and/or electromagnetic interference. For those that rely on cable manufacturer warranty programs, this is the test solutions for you. 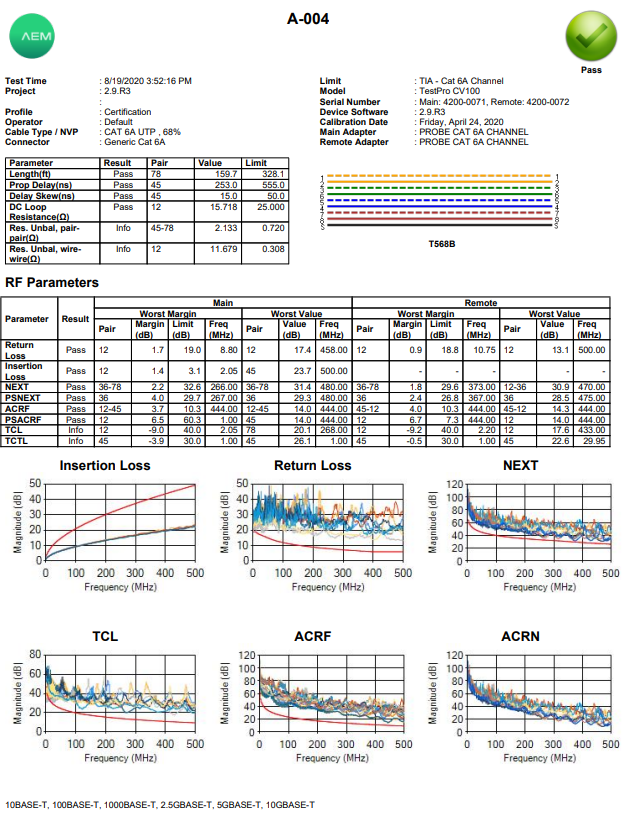 For those that do not need to perform bi-directional certification tests to comply with cable manufacturer warranty programs, single-ended Qualification+ testing using Certi-Lite delivers the ability to verify the primary RF parameters that would provide you with assurance of the physical infrastructure (example below). 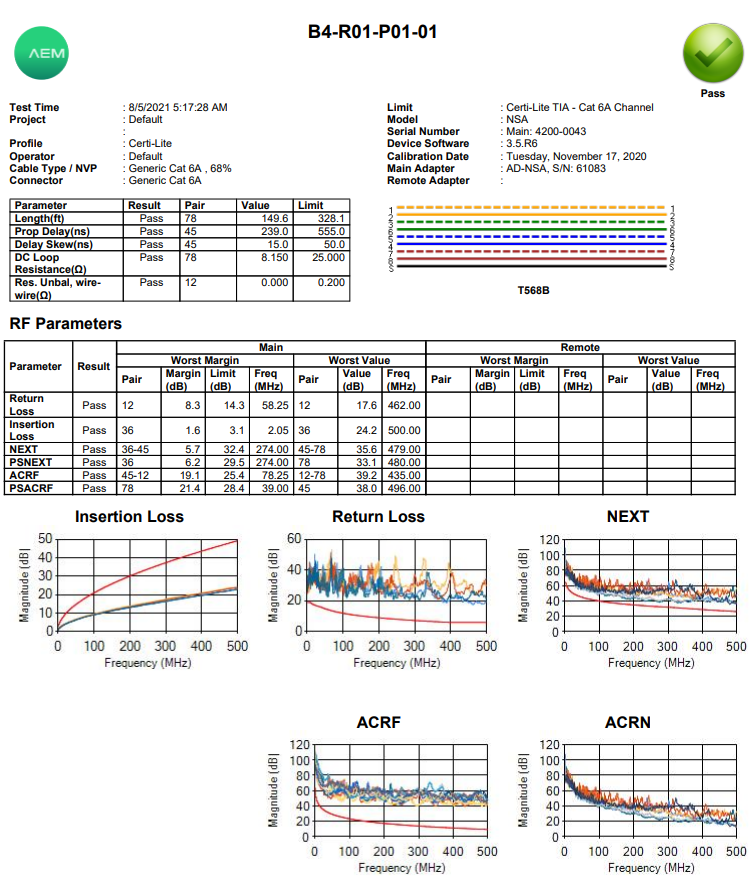 As with traditional copper and fiber certification tests that are commonly requested as part of a post cable install process, clients are now seeking similar proof that their cabling is shown to meet certain network performance and power requirements for their projects in real-world speed and PoE scenarios. As such, cabling installers can begin offering this newly desired testing and reporting step as part of the overall cable install/verification checklist for an extra fee. What’s also important to note is that the AEM bi-directional certification Autotest run as part of this process can be executed in an industry-best 6-seconds per connection including DC Resistance Unbalance, ELTCTL, Return Loss/NEXT/Shield distance to fault and more, as opposed to competitors that take 18 seconds. When hundreds of cables need to be tested, this time savings adds up. Thus, the opportunity to generate new revenue with little time and effort spent is the ultimate way to maximize profit with a single multifunction test solution. 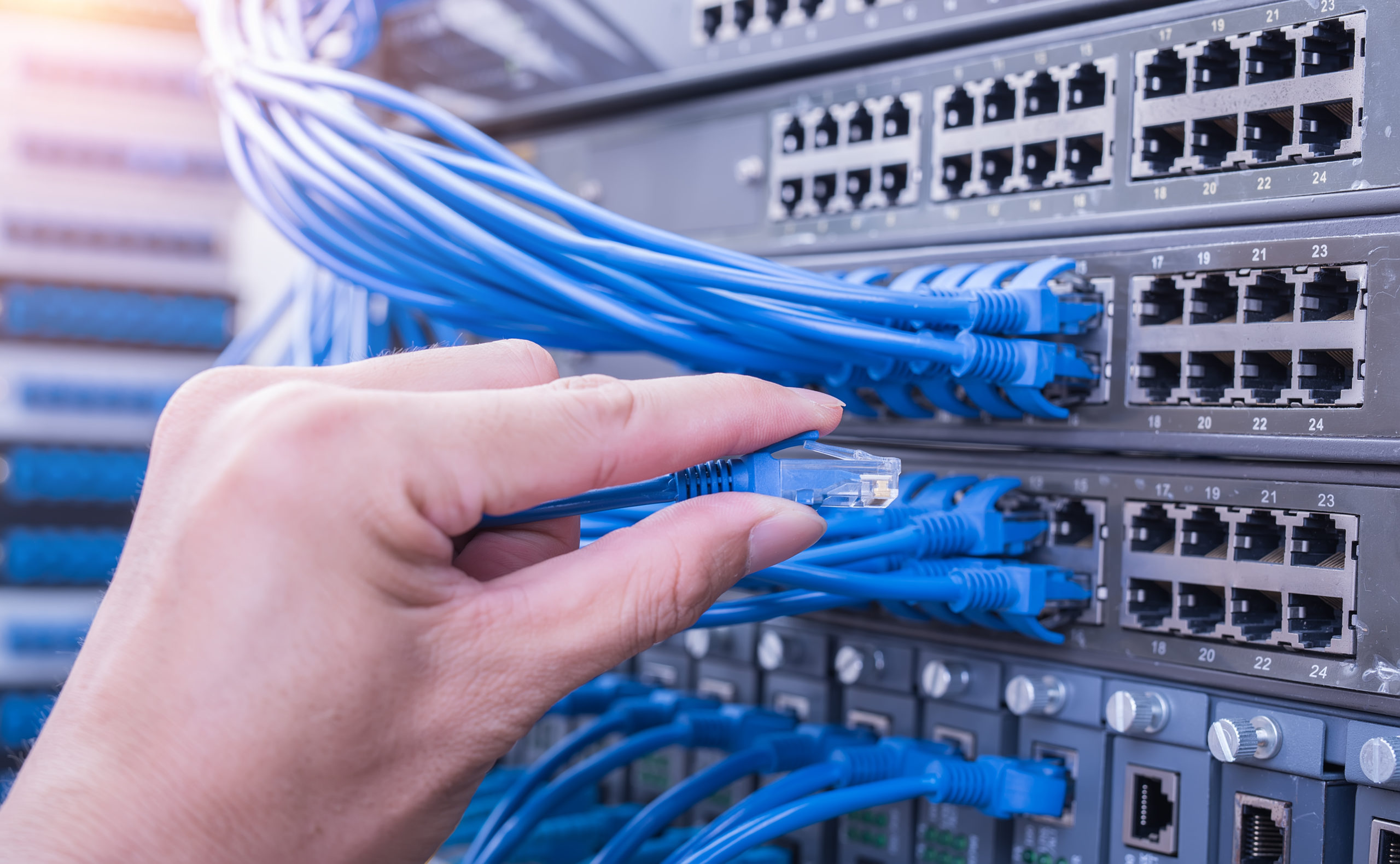 In the world of structured cabling, it’s common to hear the terms verification, qualification,...

Why Manufacturer Cable Warranties are So Important

We always want to get the most value out of our investments. Looking at copper and fiber cabling...

Enterprise cabling systems are going through a big paradigm shift. In the past, one of the main...